Historical re-enactment of the ancient therapeutic home ritual by: Club for UNESCO of Galatina

It is difficult not to have heard, at least once, of the "tarantata", women of the past, not too far away, who during the summer season, in the days of harvest, bent over on their knees, were "pinched" by the spider tarantula.

And with the bite the crisis: severe abdominal pain, feeling of exhaustion, deep frustration, trans spasmodic from which no more came out. Until someone did not recognize the origin of the evil and indicated its cure: it was necessary to call the orchestra, play and induce the pinched to "dance" to kill the spider with music therapy. Being bitten by the taranta was a disgrace that marked the lives of women and girls, who for this reason risked being marginalized by the community.
The therapy began, in a crescendo of percussion and sound, the dance of the unfortunate, on the ground and standing, crawling, mimicking the spider's gait, rolling its head, trying to climb the walls; and so for a day, or even more. The crisis repeated itself for years, for many years, during the beautiful season, preceded by the identical symptoms, freed through obsessive dance, awaiting its return, 12 months later.

They have written men of science, anthropologists and ethnologists, they have researched the causes, described the gestures, interpreted the signs. Certainly it was established that no spider exists in Puglia capable of causing those symptoms; the causes of tarantism are to be found elsewhere. First of all, in the culture of a land, Puglia has always been a crossroads of peoples, of history, of a Mediterranean nature of its own, a land of sun and suffering, of ancient tribal rites and pagan symbols never forgotten. "Middle-earth" and like all lands of magical and sacred means.

The spider becomes the expedient, the sign, the triggering force of a deeper, repressed, never won suffering: the suffering of those who work the land, of individuals on the margins of social life, who find the only spider and dance opportunity to place yourself at the center of attention, to give free rein to the frustrations of a year.
It is no coincidence that the taranta prefers women, marginalized among the marginalized, victims of a patriarchal and peasant society that relegated them to a subordinate and obscure role.
Mythical revenge, therefore; overturning of the daily rules, like once the carnival or the mysteries of the Middle Ages. For a day you can go crazy, dance.
But it is not enough; whoever has seen one of these women dance, knows that the frenzy is real, upsets, tears off; culture cannot by itself explain the profound malaise, exhaust its causes.
The tarantate, new maenads of Puglia, open a chink on even more arcane symbolisms.
The snake, spider and other creeping animals have always been sexual symbols; memories of a matriarchal society, then won by invaders who brought new images and new gods.
Apollo defeating the serpent Python, Indra who gets rid of Vrtra, Iahweh who wins the Leviathan, the same Christian God who condemns the serpent mark the triumph of a solar ideology, of the masculine over the feminine.
The spider is the idea of ​​the mother earth that re-emerges, it is the strength of ancient symbols and rituals, not defeated by Christianity and reason.
Already in the 18th century the Church tried to give a Christian coloring to tarantism; today, every 28 and 29 June the Salento tarantati (in ever smaller numbers) are "forced" to repeat their dance on St. Paul's Day, inside the church of Galatina.
They ask the saint for grace, and at the end of the frenetic dance, they hope that the following year they will no longer have to dance. But St. Paul, bound by a thousand roads to snakes and spiders, comes later: it is a Christian addition.
Originally there was the taranta bite, the dance, the drum, the mythical circle symbolizing sacred space; originally there are the earth and the psyche; and ancestral memories, which each of us carries within.
BIOGRAPHY: 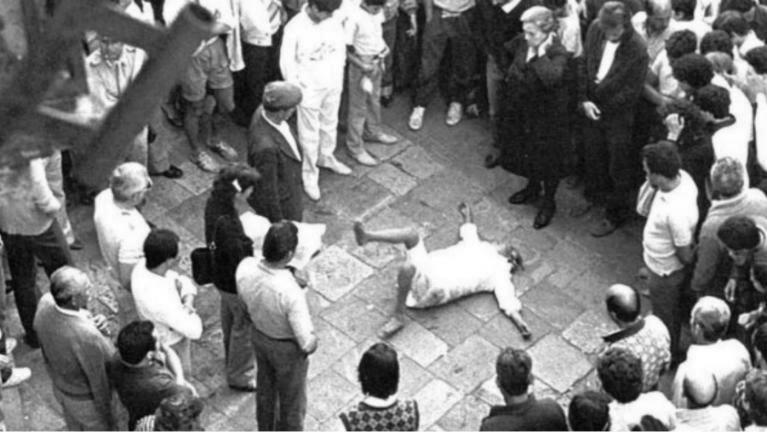 Apulian tarantism, a phenomenon that encompasses almost all the main aspects of traditional magic rituals and the forms in which they survived, is the object of investigation of the Magia e Società radio cycle. Rites and survivals in the Italian popular tradition, edited by Girolamo Mancuso and Franco Scaglia.

ANALYSIS OF THE PHENOMENON

Tarantism (or tarantolism), beyond being considered simply a phenomenon of an isteroid nature, is interesting due to the complex socio-anthropological values ​​underlying it.

The Demartinian research of 1959 has masterfully highlighted the functionality of this ritual within the culture of the popular classes of the Salento, framing it in the overall problem of the "southern question" that in those years was increasingly determining itself as central in a vast political debate -cultural.

Those affected by tarantism believe that their evil was caused by the bite of an animal which is usually called the "taranta" insect biologically known as Latrodectus Tredecim Guttatus.

However the various researches carried out on this phenomenon and the testimonies of the doctors of the area have amply demonstrated that only in very rare cases those who consider themselves affected by tarantism manifest the symptoms proper to latrodectism.

On the other hand, this is certainly not the only element that invalidates any attempt at a medical approach to the phenomenon and supports its cultural values. It will be sufficient here to recall the magical territorial immunity which the whole surrounding area has in Galatina (Lecce) where evil is treated, but is not manifested by virtue of the mythical protection of St. Paul.

The complex ritual of exorcising tarantism emphasizes pagan elements, typical of the ancient world, synchronously combined with the hegemonic Catholicism that over time has always tried to incorporate this phenomenon into its sphere.

The representation begins when the tarantato perceives the warning signs, mostly of a neurovegetative or psychic type (apparent obnubilation of the state of consciousness, emotional disorders, etc.).

He generally asks for music to be performed and then starts an incessant and exasperated dance that aims to diagnose the type of taranta that bit him ("libertine", "sad and mute", "stormy", etc.) .

Subsequently one passes to a phase of "chromatic exploration" in which the patient is attracted to garments, generally handkerchiefs, whose colors correspond to those of the taranta that would have bitten him.

Sometimes the attraction manifests itself with aggressive attitudes towards people who wear conspicuously colored clothes and which circle the patient.

In the third phase, dance, the symptoms of possession, epilettoid, depressive-melancholic or limited to a pseudo-stuporous state, occur in the tarantato.

The dance phase, or "bipartite choreutic cycle" as De Martino defined it, takes place with an alternation of expiatory attitudes - epileptiform convulsions or stereotyped postures accompanied by apparent loss of contact with the surrounding environment and liberators with pantomimes that simulate identification of the sick with the taranta.

The ritual ends with a symbolic trampling of the taranta that symbolizes the "liberation" of the sick and the success of the ritual of exorcism.

In this document the authors underline the disappearance, in recent years, of the ritual manifestations lived in the "collective" and the relegation of the phenomenon in the family environment.

In the decades following the demartinian research, there is a further process of disintegration of this phenomenon: in it the collective moments are gradually disappearing and less and less the tarantati who go to the little church of S on 28 and 29 June each year Paul to Galatina to give life to their healing ritual.  Those who still undergo this practice - in 1980 they were just two - are no longer waiting, in the square of Galatina, for a peasant community that shares their own cultural horizon, but a curious and heterogeneous crowd from which they need to protect themselves.

On the wagon that in the past led the group of tarantati from the surrounding countryside to the therapeutic site, cars are replaced today from which the sick come down a few meters from the entrance of the church.

A relative carefully watches over the few minutes of the therapeutic ritual performed before the church and is ready to lash out against anyone who intends to photograph or film what is happening.

Thinking of entering the chapel to observe the ritual taking place inside is completely in vain: only one or two close relatives are given a similar concession.

The tarantati leave the church after just a few minutes and this testifies to a further phase of disintegration of the phenomenon. They now know that it is no longer permissible to transfer their individual crises to the collective and remain entangled in a dimension of cultural anomie in which they perceive that they can increasingly rely less on this form of traditional therapy.