the history of Galatina

From the Middle Ages to the Feud

The historical evolution of the city of Galatina is marked by very precise stages that pass from the medieval city of Orsini ('300) to the Renaissance city of Castriota ('500) up to the modern one ('600-'700), characterized by a particular Enlightenment fervor.

The sudden growth of the urban fabric, recorded since the 1300s, indicates that the living conditions within the city have attracted more and more inhabitants from neighboring places, attracted not only by the security represented by the walls, but also by the mercantile ferment and availability of civic services not available elsewhere. Galatina represents, in various aspects, an example, in the most peripheral part of Southern Italy, of cities with a well-defined urban structure in which the needs of "associative life" expressed by the population have determined a "mature" urban system based on agriculture .
From '300 to' 700, Galatina found itself swinging between feud and duchy and, consequently, between feudal lord (noble, owner, lord or duke) and people (peasant and craftsman). The detachment and the difference between these two social figures will remain clear and well defined for a long time.
In the Galatina of the fourteenth century, fortified by the walls of the Orsini del Balzo, the first urban houses began to be built which were followed, in the 1400s, by the construction of some stately buildings which, thanks to their importance and popular fame, served as orientation point to identify some human agglomerations.

The residential buildings of the lords, landowners, nobles or ecclesiastics, were located in the center of the urban city core and were always adjacent to or near a square or a church. Within or in the vicinity of these noble palaces, on the ground floor, there were often some families who lived under the protection of the "lord" or were at his service.

This housing solution is still found today in several patronal court houses in the historic center of Galatina.
The first popular urban houses, built in masonry without any architectural reference, were on the ground floor, with a roof made of reed mats and covered with èmbrici. Also in this case, it was the aptitude of the various family nucleuses of the neighborhood to carry out associative life, which determined the formation of the houses in court that in the historical center of Galata is manifested in a wide type of solutions: single family courts, multifamily, grouped or single. In these spaces, more discreet than the main streets, the domestic life of the peasant families took place in all its sacredness. The ensemble of courts, alleys and streets that were concentrated close to the residences of the emerging classes or squares gave rise to the insulae (housing concentrations that today we would call neighborhoods).
Often the economic, social and in some cases religious conditions, determined the belonging to an insulae instead of another one because each of them was clearly distinguished by characteristics of life, customs and distinctive traits.
The document that allows us to reconstruct Galatina's physiognomy quite a few centuries ago is the report by Tommaso Vanna (Magistrate Inspector of the Kingdom) who visited the city in 1854 and gave a detailed description of all the routes that had been the object of his inspection.
In the report it was highlighted that the streets were "thirty-seven" of which thirty-four were well paved with "chianche" of stone, an aspect that represented an exceptional and almost rare feature in the cities of the province of Lecce. The paved internal roads were a clear sign of distinction between aesthetics, hygiene and architectural attention typical of Galatina.
A further important documentary testimony is found in the analysis of a "route" of 1597 in which the "fires" (the number of families) to be subjected to taxation in the period of the duchy of the Castriota are indicated. From this document we learn the physiognomy of the Galatina of the '500, divided and identified in twenty-four distinct "insulae". This description does not differ much from the current conformation of the historic center.

The Bagliva or "baliva" was a collection of administrative provisions that governed the coexistence of citizens, a kind of code in which laws were listed or even ancient customs that became laws.
Well, Galatina was one of the few "realities" in the Salento to have this precious instrument that represented a civil conquest of the Galatinese community against abuses in the administrative and social life of the city. This document sanctioned the beginning of the new age, the first true act of administrative autonomy in a time and in a territory like Salento, still strongly subjected to the logic of servitude.
The Bagliva was composed of eighty "chapters" (comparable to our current articles) and provided for the existence of the "bailiff", a public official in charge of compliance with the laws.
It still today represents a very precious document through which it is possible to know and explore the Galatinese society of the low Middle Ages and the ‘400. Indeed, it is easy to deduce the standard of living, customs, habits, way of thinking and the socio-economic structure of the population of the time. The aspect that best transpires from this very important document is the exceptional bond of the city with the countryside and the peasant society.
[TO. Antonaci, "Galatina History and Art", Galatina 1998] 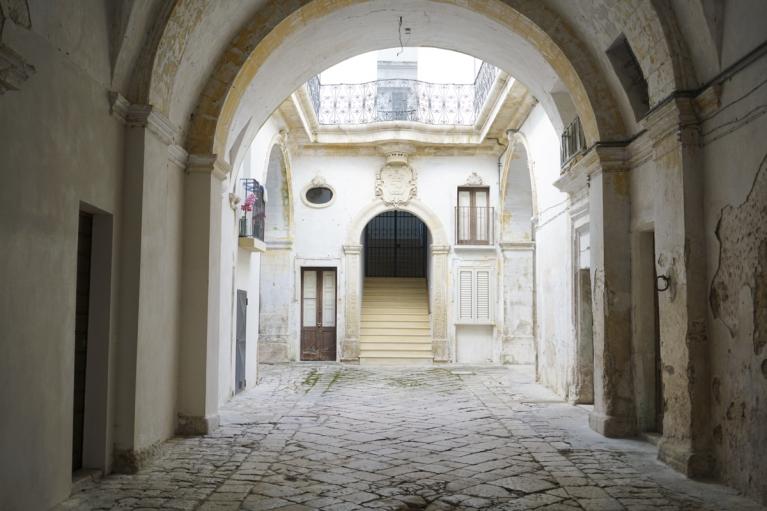